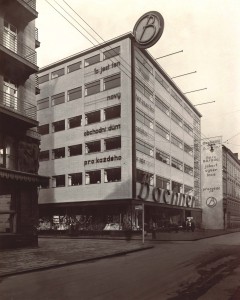 Erich Mendelsohn is considered one of the most important German architects of the twentieth century. His buildings
went up in what is now Germany, Poland, Russia, Norway, Great Britain, Israel and the USA. There is only one of his buildings in the Czech Republic, and it is also his last project in continental Europe—the Bachner Department Store from the year 1933, on the corner of Zámecká and Puchmajerova streets in Ostrava. It is a significant monument of modern architecture by an architect of international acclaim.
In late 1931, Mořic Bachner (1871–1935) bought part of an old school building (Ostrava city land registry parcel no. 177) on the corners of Zámecká and Puchmajerova streets, where he wanted to erect a new, modern department store building. His retail spaces up to that time, on Zámecká Street (Moravská Ostrava city parcel no. 1666) from 1923, were no longer suitable. How the Ostrava businessman was able to engage the services of an already renowned Berlin architect is not certain.

Visions of a Cosmopolitan Architect] in the Cabinet of Architecture in Ostrava’s House of Fine Arts. On that occasion we published a catalogue of the same name, supplemented by a chapter entitled “Erich Mendelsohn v Československu a obchodní dům Bachner” [“Erich Mendelsohn in Czechoslovakia and the Bachner Department Store”] by Martin Strakoš. The Ostrava exhibition of the works of Erich Mendelsohn2 and the book by Ita Heinz-Greenberg, Erich Mendelsohn … ze života / Biografisches,  which we published in 2012 helped reveal other facts. Together with the catalogue from 2009, it is the first publication dedicated to the work of Mendelsohn in Czech and it creates a foundation for further research on his Ostrava project, first uncovered by Naďa Goryczková in her article “Historie obchodního domu Bachner v Ostravě” [“The History of the Bachner Department Store in Ostrava”], published in 1999.3 In her book Erich Mendelsohn … ze života / Biografisches, Ita Heinz-Greenberg writes “The builder and architect possibly met in the Swiss winter spa complex of St. Moritz. The initial coordinates of this project could have been the Chantarella Hotel during the winter holidays of the year 1931–32. Over of glass of wine during a walk through the winter woods it would not have been difficult for Mendelsohn, with his deep professional knowledge and extensive experience, to convince Bachner about constructing a new department store. It was Mendelsohn’s last stay in St. Moritz.”4

Whether it was due to Mendelsohn’s gift of gab during a winter holiday, or to good references is yet unknown. In the spring of 1932, the builder contacted Mendelsohn’s office to commission a modern department store building in Moravská Ostrava. In June 1932 he requested the demolition of the former school and the request was approved by the city on July 21st. The construction office then, on the basis of “plans by the project architect Mendlsohn [sic] of Berlin”, issued building permission on 18 August 1932. Mendelsohn did not take part in the project closing, since he emigrated in March 1933 as a significant person of Jewish ethnicity from Nazi Germany to Britain. The project was finished by his long-term assistant Johann Schreiner, “who was responsible for transforming the architect’s blueprints into the form of building plans”. The construction was carried out by the construction firm Ing. Strassmann, Glogar a Korn. It was finished on 29 September 1933.

Mendelsohn designed an L-shaped building for Bachner. The main part—building “A”—was intended for the public, with a rear building “B”, which featured a courtyard for warehouses and facilities, including a terrace where employees could take breaks. At first glance it is a simple ferro-concrete structure framed by a wall, however it does not hide typical Mendelsohn elements which he used in this building and in his other buildings, which came out of the German architecture of New Objectivity.

The lateral, vertical stairwell is compositionally similar to that of the Schocken department store in Chemnitz. Martin Strakoš described it in the catalogue: “The main communication route was made up of a three-flight stairwell with rails of steel tubing, opened up by a vertical glass axis onto Zámecká Street. The exterior character of the building is determined by the contradiction between the fully glazed parterre with extensive display windows, separated from the upper section by a continuous three-part ledge with retractable awnings to shield the shop windows from the sun in the summer months. Two main entrances, one into the shop on the ground floor and
one from the vertical communication, from Zámecká Street. Mendelsohn faced the façade from the first to fifth storey with ceramic tiles, brand-name Dursalit, from the Czech firm Rako, stamped into the tiles on both façades facing the streets. The subtlety of the complex is emphasised by the indented cornice, which seems to levitate above the building. Its dynamic effect is underlined and created by the rectangular steel panelled windows, arranged serially into horizontal bands of windows, graphically creating the subtle structure of the façade.”5 Another typical Mendelsohn element is the use of advertising elements as aesthetic and functional parts of the architectonic concept. Its dominant visual feature was the neon advertising logo with the huge letter B in a circle and the Bachner name above the display windows.

The sales floors were freely accessible by the above-mentioned main staircase, and thanks to the rows of windows above the cabinets the spaces were illuminated by daylight. Strakoš comments thusly: “The building was confined to its own world—along the walls were shelves of goods and the windows functioned as the source of natural light. They were not to disturb nor distract one’s attention to what was happening on the street below. Thus the spatial enclosing of this building approached today’s utilitarian functions of sales points, aimed at presentation and sales of goods, not representation and communication with the outside environment.”6 Eva Chvalová, in vol. 22 of the Ostrava… anthology adds “The individual sales floors were arranged as one large hall, specialised always on certain types of good. On the ground floor the customer could buy general household goods, on the first storey women’s and men’s fashion and sporting goods, on the second storey was kitchen equipment and fabrics and on the top storeys were furniture and carpets.”7 As a matter of course it featured hot air heating, automatic air conditioning, lifts, and toilets for customers on every storey.

Thus in Ostrava was not only a modern department store founded which satisfied all contemporary standards, but at the same time it had what the competition of the time did not: architectural quality. After the death of Mořic Bachner, his sons Alfred and Erich ran the firm with his sister Greta Schönová and her husband Gustav, who was a shareholder in the firm, the firm’s accountant and ran the store’s operations.

After the war, Erich Bachner ran the department store for a short period of time until nationalisation in the communist coup of 1948, when it was renamed Horník (The Coal Miner—the name it retains to this day) and became part of the national firm Obchodní domy (Department Stores)—later Prior.9 During renovations its advertising logo, which surprisingly survived the war, was removed. Luckily, the windows were replaced with some sensitivity. In 1958, one of the first Ostrava self-service grocery shops was installed on the ground floor. In the 1960s, a reconstruction and expansion was proposed in the direction of what was then called The People’s Militia (now Masaryk) Square. Luckily, this did not come to pass. In 1984, after thirteen years of effort, the building was finally declared a cultural monument. This however did not prevent partial degradation of its architectural merit during reconstruction at the end of the 1980s, during which (just to name one) all the windows were replaced, and the subtlety and dynamic of their horizontal integration was lost. The stairway and lifts were also separated from the sales floors.

The Bachner department store has been lucky in that it has remained standing to the present day and still fulfils its original function “its state however, does not answer to the significance of this monument of modern architecture by an architect of international stature. On the other hand, in the 1990s it was possible to renovate the original look of the parterre with retractable awnings over the shop windows on the street and the monument care department  prevented the exploitation of the complex in an attempt to cover up its artistic value by all sorts of advertising materials. The building, despite its condition, at least retains the mantle of the work of the artist, the history of the Ostrava Jewish community and an important chapter in the modern history of Ostrava,”10 concludes Martin Strakoš in his catalogue text. As curator Regina Stephan put it in her introduction for the Ostrava catalogue to the exhibition in 2009, this is the last job of Mendelsohn’s Berlin office. But that was also the first exhibition of this architect in the Czech Republic. We hope that our activities will help not only in increasing the awareness of the work of Erich Mendelsohn in the Czech Republic, but also to a certain extent contribute to the rehabilitation of his only work in our country.